A concept which I want to throw out is value added PPP e.g. Wheat cost might converge across geographies due to subsidies but the price of derived end product such as bread would diverge. This is a hypothesis, when I get time, I will work on statistical rigor and 'p' values. For now there are shortcuts which the mind takes and enables lucidity of prose. I am prone to jumps of thought, but let me give a structure, PPP would primarily be food, shelter, transport and entertainment (alcohol included in entertainment!). Moving on to transport, something dear to me are the railways and I still remember the siren sound of Black Diamond express which would transport us from Barauni on the banks of Ganga at Mokama to Howrah. Taking a leap, so much so for convergence, the cost of things in India is still cheap, even compared to China. The transportation cost of India would be cheaper than China and one-fifth of that in the US. In case of Metro the ratio would be more skewed. The point I want to make is that Governments should invest in massive infrastructure and subsidize power so that the output is competitive in price. It could sound anti-competitive but giving free power to farmers and not charging taxes actually keeps India free of hunger. I will revisit this argument as I personally have swung across both sides of the argument, but just see the impact of Hoover Dam or Panama Canal from a cost structure perspective.
Posted by surya prashant rao at 11:21 PM No comments:

Convergence is the buzz word. To monetize convergence, air conditioner with anti mosquito technology could do well in India. The problem with split AC's is that they are mounted high in the air. A replacable liquid anti mosquito canister alongwith electronic anti mosquito frequency is the idea.
To execute, a few visits to china might be needed to look at the AC OEM components.
Thoughts my friends?
Posted by surya prashant rao at 6:54 PM No comments:

Remember the Balanced score card and the strategy map? In the strategy map the drivers are the trained and motivated employees who work as per well defined internal and external processes to deliver products or services which result in performance which can be measured by financial metrics like ROCE or ROE.
As per an article I read today, Key Performance Indicators(KPI) cannot be a financial metric and need to be something which management keeps a tab on every day and every hour. Every employee is in some way responsible for the KPI. Example KPIs are late arrival of flight, customer satisfaction etc. Is it possible to monitor financial metrics every hour and is the investment in such a system economical?

An example Key Results Indicators (KRI) can be the Dupont formula or ROE which can be subsequently decomposed into net profit margin, asset turnover and degree of financial leverage( asset/Equity). Performance indicators can be number of employee suggestions etc. The article also downplayed the causality angle or lead (driver)-> lag (result) analysis method and used the metric late arrival of flight to prove the point. Is this metric a lead or lag indicator?
Posted by surya prashant rao at 10:14 PM 1 comment:

I just finished reading Outliers by Malcolm Gladwell. It is a good read, what struck me was the lack of any reference to east Indians in the book! Only the korean, chinese .. rice growing chinese from pearl valley delta are taken. This makes me wonder if the author has a selection bias in the data.
One of the organizational behaviour inputs was the importance of autonomy and expectancy in a job, yes the Vrooms expectancy model where the motivation is determined by ones perceived chances of achieving valued outcomes. effort->performance expectancies and performance-> outcome instrumentalities influence the degree of effort, which is almost like P(A/B) is a factor of P(B/C) chaining. Also note that during my MBA I could not discriminate between performance and outcome :P, its only in a job that you start realizing the asymmetry of performance and outcome. I started thinking of my wife, who as a doctor certainly has a higher degree of autonomy. One of the advantages of my consulting profession is a high score on the autonomy axis.
Well the core idea of the book is that raising children by middle class is more like cultivation due to time sequencing of learning activities and also making use of the vacation time to build additional skills. I still remember my father giving me algebra homework from Hall & Knight during summer vacations, and all I wanted to do was to devour the next Issac Asimov novel from Haldia IndianOil officers club library. Well I did read the steamy passages from Eric Van Lustbaders novels too :P

The other concept is usage of mitigated speech in a hierarchical setting when speaking to superiors. An example given was the disastrous consequences in a cockpit where the listener does not have the luxury of time to interpret the fine nuance. I started wondering if inter team communication during a short high burn client strategy engagement require mitigated or direct communication? Mitigation of speech and nuances in sentences would be important for global firms which operate in advisory space. Overall a good read 4/5.
Posted by surya prashant rao at 11:28 PM No comments:

In the last post, I had mentioned about the importance of cash flows. One shouldnt however follow it blindly as I was almost about to sell BEML stock based on
negative operating cash flow of Rs 411 crores(Rs 4.11 Billion). However it was the inventory which increased from Rs 2 Bn to nearly Rs 6.9 Bn. With an inventory turnover ratio slightly greater than one. The gearing has also increased due to increase in working capital and other capex.

Looking at the downstream value chain becomes important as one analyzes as to where are BEML's products being used: for building roads and metro coaches primarily. The Medium term drivers are following:
1. The National highway development plan is going to receive a boost, however I saw mostly kobelco earth moving equipment in Hyderabad while travelling to the airport. So is this a valid correlation cov xy/ sigma x. sigma y
2. Metro is going to come up in Bangalore, DMRC is in for a massive expansion, so rolling stocks requirement is going to increase. That could be a reason for the significant increase in inventory other than a desire to build up inventory when the raw materials are in a negative cycle

In terms of long term drivers:
- Public transport could receive a boost with increasing urbanization and spending power in developing countries while the lobbying power of automakers decreases witht the Detroit bankruptcies.
- Mechanization in building roads is going to increase in India.
- Real estate prices in Bangalore are going to increase and BEML's real estate assets are significantly undervalued.
To end the post let me be a bit humorous, history does repeat itself like I read in russian science fiction in a story where a physicist is about to cross an unmanned railway crossing. BEML price has yo-yoed between 500 and 1700 in the past, so buying opportunities might be there sub Rs 750. Credit Suisse has a target of nearly Rs 1200.
Posted by surya prashant rao at 9:49 PM No comments:

Non recurring items and other income

HDFC Bank: Out of a total income of $1040 Million, other income was nearly 20%, up from 14% in Q1 of 2008. What does this other income constitute of ; unconsolidated subsidiary earnings?
BHEL also had a higher income due to non-recurring item. These are important as analysts are primarily using recurring income from continuing operations to gauge the valuation of company. Will this impact DCF valuations, yes ! as one needs to make sure that the future cash flows are not incremented based on a current bloated cash flow due to one time infrequent /unusual/extra-ordinary item.
Posted by surya prashant rao at 9:41 PM No comments:

Let me be honest, I invested in Praj after seeing a news item that one of the Menlo Park investors had invested in it. Venture capitalists are more focussed on the business model than on just the numbers which means that they look at cost structure, core capabilities, value configuration, opportunity cost, value proposition, customer relationship, distribution channel, target customer and revenue streams. Let me take a peek at revenue and cost.

To get an appreciation of the magnitude of Praj industries overseas investments and their performance, lets look at their annual report. Revenue was 7719 Mn in FY 2009 up 10% YOY. The Profit after tax was Rs 1297 Mn, down 15.5%. Site expenses and labour charges have increased to Rs 1907 Mn from a base of Rs 496 Mn.
The breakdown of revenue has been almost half and half in rest of world and India.

The subsidiary financials have been consolidated with Praj industries financials based on AS-21.With these figures in perspective, Praj industries has invested Rs 218 Mn in Praj Schneider. Praj owns 60% equity in Bioenergy Europa which has revenues of Rs 705 Mn in FY 09. Unrealized forex gain is Rs 240 Mn.

Beers sales are only expected to rise with the increasing pricing power of fermenting industry in India. Praj is working on both ethanol and bio-diesel technologies. If we take a 10 year horizon, Oil is definitely going to spike again resulting in super normal profits for the alternatives. Governments may further the alternative investments to protect the domestic economies. Clean technologies has been a theme with lot of emotional attractiveness and makes financial sense.
Posted by surya prashant rao at 12:25 AM No comments:

Thats me on the tree 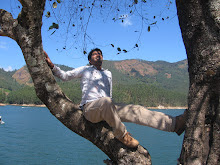